You don't have any saved vehicles!

Look for this link on your favorites:

Once you've saved some vehicles, you can view them here at any time.

About The Kot Auto Group 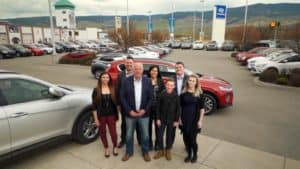 John married his High school sweetheart Trina at the age of 19. She has become instrumental in the growth of the company over the years.

Trina works behind the scenes on major decisions and human resources but is still very active parenting their youngest son Logan born in 2009.

John had several senior management positions over the 17 years he worked in Edmonton. In 2010 he moved the family to the Okanagan with his family. Putting everything on the table with the acquisition of his first dealership Kelowna Hyundai in November of 2011!

Throughout the growth of Kot Auto Group, John has been proud to be able to put family first and build a family-owned and operated business he can be proud of.

After growing up around the car business, Brandon, Trina and John’s oldest son, started selling cars right out of high school. Brandon left the family business for a few years but remained in the car business to gain experience in Finance and Sales management. Brandon came back to Kot Auto Group in 2018 and is currently the Active General Manager at Victoria Hyundai and the Director of Operations for the group.

Jordan attended University right out of High School and graduated with a business degree.  He and his Wife Hali just had their first child, Haven. Hali is a stay-at-home-mom and is loving every minute of it. Jordan is currently the active General Manager at Kelowna Kia.

On top of a passion for cars, John is an avid sports fan! Hockey is his favourite, where he has been both a coach and player. His favourite pastime is taking his longer termed staff to Haida Gwaii for the annual Kot Auto Group Fishing Trip! In John’s spare time, he keeps busy with his younger son Logan and wife Trina.

Where It All Started…

John started selling cars at the age of 18 in his hometown of Weyburn Saskatchewan while taking over the family farm. Realizing he was better in sales than farming, he dove into the auto industry becoming a very high performer. Many customers still remember his “John’s pick of the week” that ran in the weekly paper. Trina and John moved to the Edmonton area where John moved up the ranks over the next 17 years, including several senior management positions for 2 local Auto Groups.

In 2011 they purchased Kelowna Hyundai as their first addition to the Kot Auto Group. Today they are very proud to be a community-minded dealer group where all their adult children are involved in the business. 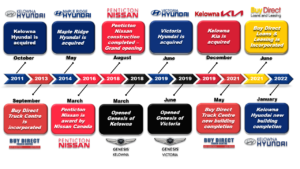 New Vehicles
Finance Centres
Contact Us
Get directions to one of our locations:
Search
Find Your Vehicle

You don't have any saved vehicles!

Look for this link on your favorites:

Once you've saved some vehicles, you can view them here at any time.